Every morning at 9 o'clock, coffee in hand, Antonia Tyz Peeples comes to the converted playroom in her contemporary house in Lebanon. As the sun streams in from a skylight, she sets to work: creating intricate, realistic large-format paintings of waves in motion.

Tyz Peeples' artwork is so successful she has finally quit her day job at an art gallery in North Smithfield, R.I., to devote herself full time to painting. The wave paintings have earned her four solo shows at a Rhode Island art gallery and are now in galleries from Cape Cod to Charleston, S.C.

Tyz Peeples, 55, has been waiting for these days for a long, long time: Since she quit art school after one year, no longer able to afford the tuition; through the early years of painting people's pets and houses, anything to make a living by her brush; through decades of raising a family and teaching art to senior citizens - all while squeezing painting in when she could, and having a picture or two in this or that art show. 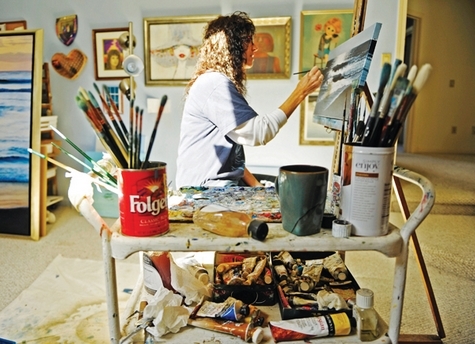 While she will still work one day a week at the Charlestown Gallery, in Charlestown, R.I., where she has had those solo shows, Tyz Peeples recognizes that she has turned a momentous corner in her artistic life.

"I'm very excited. That was my dream, to paint full time, and I'm living the dream," she said on a recent summer morning.

And it all came in on a wave.

About five years ago, Tyz Peeples turned her eclectic attention to the ocean. Her first attempts were muted, diffuse, as though the artist was not yet ready to tackle her subject with the detail and clarity she brings to it now. Standing before one of those early paintings, "Sand, Sea, Sky," she recognizes how her art has developed since then. "That was when I was first starting. I was just getting the idea – large ocean – that was my idea."

But examine her recent work, and there is no comparison. The waves are lenses into some other world, a mix of lemons, limes and blues laced with veins of white froth, like panes against stained glass. The spray arcs up with the animation of a human figure dancing. In fact, one of her paintings is called "Primal Dance," a wave double breaking whose geysers of spray could be human figures reaching for the sky.

At her most recent solo show, one of the most popular canvases was "Diamond Fest," depicting night at Napatree Point in Watch Hill. It was a perspective she had tried to capture in the past, but only now did she seem to have the technical experience, and perhaps the insight, to make it happen.

Valerie Nixon, an art dealer from Crofton, MD, who's known Tyz Peeples for about seven years, describes her style as "photo realistic plus," the accuracy of photography blended with the emotion of the experience. "It's something that's very ephemeral," she said. "It evokes the same emotional reaction that a person has when they're at the beach."

The work starts not in the studio but along the shore, mostly in Rhode Island from Westerly to Narragansett, with Charlestown being a favorite spot. Tyz Peeples does not paint on location, but she takes dozens of photographs to bring back to her studio. These she files in manila folders with names like "Possibilities." She slashes crop marks on the prints, looking for views that can be combined into a fictitious place where the photograph will end and the painting will begin.

The first step is to find "the golden section," creating a mathematical grid on the bare canvas according to da Vinci's theory of the ratio of space most pleasing to the human eye. The ratio's formula is eight-thirteenths of any space; on a 36-by-36-inch canvas, Tyz Peeples draws lines, two horizontal, two vertical, each, according to the formula, 22.15 inches from the edge. The resulting grid, dividing the canvas roughly into horizontal thirds, shows her what areas to focus on and what areas to avoid.

"Never the center; the center is the worst," she said. Instead, she focuses interest off-center and in the top and bottom thirds of the canvas, so there is always something of interest moving the eye around the painting.

In her studio, where the carpet is sand-colored and the walls as blue as the waves, she can paint for hours, as dance electronica music on the CD player takes her to a zone of concentration. She is in the middle of composing a view of the dunes at Napatree Point, with a path from one photo, overlaid with autumn dune grasses from another. The painting is one of two commissioned by Mary Martin Fine Art in Charleston, S.C., a gallery she's just connected with. Other recent commissions include Wynne Fine Art in Chatham, Mass., and the tony Copley Society of Art in Boston. A far cry from those early, struggling days.

She was born Antonia Tyz in New Britain. Her father, Walter, was an amateur photographer and prison guard who shot news photos of the deadly Hartford circus fire. Her mother, Susan, who died when Antonia was 15, was an Impressionist painter who devoted most of her energies to raising Antonia and her brother.

When Antonia was 8, the family moved to Stafford Springs so her father could work at the new prison in Somers. That was the age, too, when she started drawing and painting, taking after-school classes, encouraged by her mother, whom she describes as her "best friend."

"She was eclectic. My father was a lot more traditional," Tyz Peeples recalled. Still, she received an artistic legacy from both parents. "Whenever we went anywhere, he had the camera." She would hold the white board for him to get the perfect exposure, and she learned about how to chase the sun, and the right time to shoot.

When it was time to go to college, she enrolled in every art class at Eastern Connecticut State University that she could find, but art was not offered as a major, and she didn't want to go into teaching.

She left after two years and enrolled in the Silvermine Guild of Art in New Canaan. "It was a very intense experience. The art teachers were great; it was very out-of-the-box at the time."

After one year, short on funds, she decided to leave the two-year program, even though one of her professors tried to talk her out of it. "I appreciated his talk, but I left because I just couldn't afford it," she said.

With her first husband, she moved to Rhode Island, where she raised three children, taught art for a recreational program, and was exhibited at a number of galleries. Ten years ago, she was happy to sell a painting for $750.

When she began to hit with the wave paintings, no one was more surprised by her success than Tyz Peeples herself. And when she sold a painting at the Charlestown Gallery for $10,500, it was hard to wrap her mind around it. "For ten grand – I want to drive it and it's got to have AC and a good speaker system," she joked.

When told recently by a Cape Cod gallery that her paintings could command three times that figure, she was reluctant to increase the price. "I appreciate it, because I've gone through my car looking for money for milk," she said. "But I'm not out to gouge anybody."

Her husband, Bruce Peeples, couldn't be prouder of his wife, but even he is astounded watching people clamor for her work – going so far as to sign a waiting list for a painting that's already spoken for.

"She gets that 'something' that triggers in people a tremendous emotional response," Nixon said. "People actually fight over her paintings. I've seen it happen."

She may be uncomfortable with commerce, but Tyz Peeples is grateful, too, recognizing that this new popularity has put her in a position to do what she wants: walk into that blue-walled studio every day, pick up a brush and paint.

"I've waited so long for this. I'm in a hurry. I feel like five years of painting with these waves was a moment. … I really appreciate every minute."